In conversation with Graham Pountney

As we are lucky enough to have professional actor Graham Pountney as a 'guest' actor in our next production, 'Suddenly At Home', we took the opportunity of asking him a few questions... 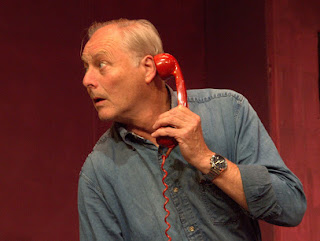 Graham Pountney onstage as Glenn in 'Suddenly At Home'.

Could you tell us a bit about your acting career and links to the Island?
My parents first brought me here when I was three. Then we came every summer, my folks building their retirement home here. Now they have passed on, my sons come down too!
I have been followed for approx forty years by the County Press who reported my graduating from Bristol Old Vic drama School in the 70s. I was a regular character  in the BBC TV series Howards Way, shot in the Hamble.
Recently I brought to life two Anthony Minghella plays at the Quay Arts Minghella Theatre in June; and an evening of Alan Bennett plays the year before - I toured Richard II and Edward II to The Ventnor Fringe in 2017; and presented my solo show as Charles I in Carisbrooke Castle last year too!
Is this the first time you have acted at the Apollo Theatre?
Not exactly - I rehearsed my audition speeches for drama school on the stage in 1973!  Otherwise, yes
Without giving too much away, can you tell us a bit about ‘Suddenly At Home’ and your character?
Glenn is a charmer ... he wants to better his life, and subtly resents his wife having more cash than him, and the way she wants to spend it and live her life.  He decides there's a way to better himself on his own terms.  The play's about him attempting to do that - but other people get in the way
What made you agree to be part of this play?
I was asked! - and I've also been discussing with the Apollo about bringing a play to the Theatre with my company next year - and it seemed a great way to get to know everyone, and enjoy entertaining audiences too.
What would you say to anyone thinking of coming to see it?
Be prepared to have your ideas changed - nothing is quite what it seems in the play, and the tension is tangible.  A great night out!


'Suddenly At Home' by Francis Durbridge is staged at the Apollo Theatre for 7 nights from Friday 6 September (not Sunday or Monday). Tickets can be obtained from our website at  https://www.apollo-theatre.org.uk/suddenly-at-home/ or by phoning our Box Office on
01983 210010
Posted by Apollo Theatre at 05:02