Jeeves and Wooster in Perfect Nonsense - The Apollo Players

‘Team Nonsense’ is the title used by Fiona Gwinnett, director of the Apollo Players’ latest show, to describe the close-knit team who once again have put on a remarkable production at the Apollo Theatre.

And what a triumph for all involved!  The play, ‘Perfect Nonsense’, is an adaptation by the Goodall brothers of a number of PG Wodehouse’s ‘Jeeves and Wooster’ novels.  The storylines will be familiar to Wodehouse fans: the stolen cow-creamer, the policeman’s helmet on Boat Race night, the dreadful Madeleine Bassett and the otherworldly Gussie Fink-Nottle – all appear in the play, and every one of the characters, including of course Bertram Wooster himself, is played by a virtuoso cast of three.  Joel Leverton, Robbie Gwinnett and Peter Harris between them moved seamlessly from role to role – in one case simultaneously, as Robbie Gwinnett played a conversation between two characters by turning first his right side, wearing a gentlemen’s tweed suit, and then his left, clad in a flowing ladies’ dress, to the audience.

Fiona Gwinnett’s use of the word ‘team’ was absolutely borne out by this production.  The Players specialise in ensemble work, and this was no exception.  The set was a masterpiece of the set-builder’s art, comprising as it did a revolve – seemingly rotated by one of the characters leaping on a bicycle – and three separate sets, painted in effective trompe-l’oeuil.  The wardrobe department as usual excelled themselves, as the actors became first one character and then another in faultless 1920s outfits, and the lighting and sound team were spot on with the multiple and complex changes of scene.

But the abiding memory taken away by all the audiences was of absolute hilarity.  We were breathless with laughter as Peter Harris, as the very elderly butler Butterfield, tottered across the stage; as Bertie Wooster got almost inextricably entangled in his braces; as Jeeves morphed into Madeleine Bassett through the judicious use of a lampshade and a pink silk scarf ... the list could go on.  Sadly the show is now over, but it was a piece of wonderful ‘nonsense’.


Robbie Gwinnett, Joel Leverton and Pete Harris in just one of their guises in ‘Perfect Nonsense’.
Photo by Paul Jennings 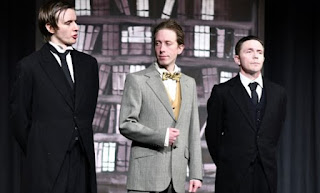