Three generations of women and one year of comedy, courage and romance, combine in the Edinburgh Fringe award-winning play 'Little Gem' - next up at the Apollo Theatre in Newport.
Amber has bad indigestion and the Sambucas aren’t getting rid of it.  Lorraine attacks a customer at work and her boss wants her to see a psychiatrist.  Kay’s got an itch that Gem can’t scratch (but maybe Kermit can).  Paul is just using Amber until he can get to Australia.  The Hairy Man fancies Lorraine but fails to rise to the occasion.  And Gem doesn’t like the neighbours coming in to ‘mind’ him.  And if all that wasn’t bad enough, Little Gem makes his presence felt and life is never the same again.


Maggie Cardew, director, who is also the Apollo's artistic director this season, said: "I have five very special people in this play: the three generations of women, along with two ‘living props’. Doing this play has put me on a great adventure, and if we get this  right the audience will come along with us too, and join a roller coaster ride that will make them laugh, squirm and cry in rapid succession through the whole evening!"


For more information and online booking, go to www.apollo-theatre.org.uk

The cast in rehearsal with Maggie Cardew (right) 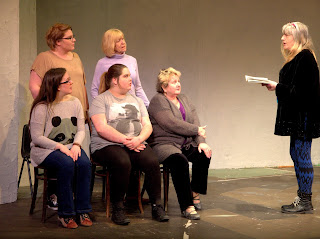