Our Silent Actors Speak Out!

The cast of Little Gem include two actors who never speak, Carole Crow and Eve Fradgley....

...so we thought it was only fair to let them say something now.

Your roving reporter asked them about their roles...

Q Can you briefly describe your role in Little Gem?
Carole:
I'm playing the part of many 'shadows' as they are being projected from the minds of the three main characters!
Eve:
My role is one of the Shadows or "Spectres" it's really good fun and a massive challenge. I have to be able to twist my body into 100 different shapes and sizes and become whoever I need to be in an instant!

Q Isn't it easier having a role with no words to learn?
Carole:
Easier! Oh no! I've had to really dig deep to get into these characters without words and as the main actresses have so expertly developed their roles, so the shadows have too.
Eve:
No!!!! I thought it would be easy, having done roles with huge amounts of lines to learn but boy was I wrong! I have found myself more worried about this than anything else! Remembering who I am and what I'm doing is challenging, but I don't envy the girls who are speaking, they are doing a fab job!

Q Have you ever done anything like this before on stage?
Carole:
Never! I've always loved playing strong character roles but this is a big step into the unknown!
Eve:
No I haven't, I've done a lot of theatre, from straight acting, comedy, musicals and even dance performances, but I have never had to spend so much time silent. I have done physical theatre before, so it's been really fun being able to use some of those skills, and it's been interesting to learn many more new ones. For once I have to really think about my characters in greater detail, as I'm playing more than one, and I don't have a voice or costume to indicate who is who!

Q Your 'look' is quite anonymous. Why?
Carole:
I'm not real! I'm just an image that has to be portrayed by movement and expression in an instant, without a costume or a voice. I hasten to add that I am clothed!
Eve:
We need to be able to morph into anyone, and quickly, using our bodies and faces instead of costume. The androgynous look makes it easier. It also is a reminder to the audience that we aren't really real, just ghosts of the past helping to tell the story of these characters and their lives.

Q What's the hardest part about performing your role?
Carole:
At first it was keeping my mouth shut! Then letting go, allowing myself to immerse into each shadow. It's certainly been a learning curve but great fun and lovely working with such talented people.
Eve:
Having to let it all go. Hard to believe but I'm actually quite a shy person (I know, I know) and with this role I have had to really go for it, and not be afraid to make a bit of a laugh out of myself, and use my face and body in great exaggerated movements! I'm glad I have had the opportunity as it is probably something I would have shied away from. 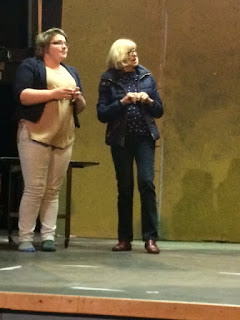 Eve (left) and Carole onstage during rehearsals for Little Gem.
Posted by Apollo Theatre at 09:04