From the moment this play began we knew we were in for something a little different: with the curtain still closed, a kindly gentleman dressed in white carried a basket of flowers around the auditorium, offering blooms to various members of the audience. The ethereal air was heightened as he stepped up onstage as the curtains opened and promptly vanished into a greenhouse stage right.

A complete change of atmosphere brought the main character, Grace, onstage, in the middle of a telephone conversation which served to establish the humour of the situation and introduce the other characters who variously interrupted Grace’s conversation until she gave up in despair.

We quickly learned that Grace was newly widowed and felt her home had been invaded by her sister Ruth, over from missionary duties in Uganda to support her; daughter Jo, clearly concerned for her, and new incumbent of the parish of which Grace’s husband Bardolph had been vicar – and new resident to be of the vicarage. No wonder Grace feels beset!

Di Evans excelled in the central role and made the most of the witty script, from enumerating the number of cups of tea she has poured and tons of shortcrust pastry she has made as the traditional vicar’s wife, to her acerbic comment at the end when reminded of the Children of Israel’s forty years’ wandering in the desert: ‘That’s because the men were in charge’.

Di was ably supported by Amy Burns as her psychotherapist daughter, happy to take on the problems and issues of the world but unable to objectively assess her own relationship failures. She counselled new vicar Sarah, played beautifully by Sue Edwards, haunted by her own secrets and troubles from the past.

Helen Clinton Pacey as Ruth was by turns hilarious and deeply moving, as the buried secret of her relationship with Grace’s husband thirty years before surfaced. The scenes where the sisters were forced to address, not just the infidelity but the fact that neither Ruth nor Bardolph had told Grace  of this, were heart-rending, and we completely understood both viewpoints.

Bardolph, or Bardy, himself, played with perfect understatement by Danny Carmichael, proved to be the kindly gentleman we had met at the start, and he appeared frequently through the show to talk to Grace as she struggled to come to terms with his loss. Some of the most poignant scenes, including Grace remembering times with Bardy, took place down by a stream at the bottom of the garden.

The separation of these settings, and indeed the setting and lighting in general, was an integral part of the success of this play, and as much praise should go to those who designed and built the set and managed the amazingly subtle lighting effects – I loved the dappled lighting representing the stream – as to those on stage.

The tone of the play shifted from laugh out loud comedy to subtle reflection and thought-provoking drama as the storyline progressed, but it never lost its pace nor its ability to find humour in the darkest of situations. The core of its message is voiced by Grace when she notes that people are never destroyed by truth – it’s lies that are so dangerous and hurtful. Yet the play ends on a positive note: months later, new vicar Sarah is happily pregnant and Grace and her family are off to meet the son Ruth has kept hidden for so long. Redemption, and healing, are seen to be possible, and Grace is finally able to let Bardy go in peace.

Well done to all involved in this production, from the actors and backstage folk to the front of house volunteers – the audience had a real treat of a show!

The amazing setting for the show 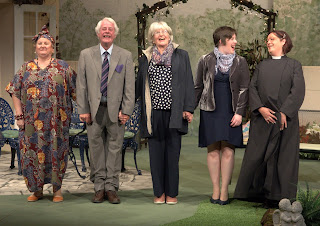