Historic Changes at The Apollo 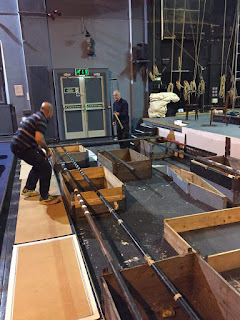 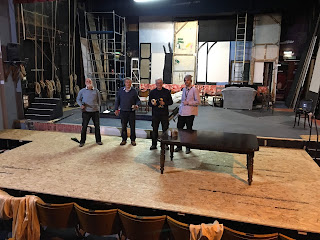 Having been chosen as the Director of Bronte, Di Evans read it through to get a feel of how it might be staged.  The script contains few stage directions and no suggestions for the set.  One night when working in the theatre she admitted that she was having trouble visualising it. In fact she said that the only way it seemed to work in her head was “in the round”.  As it happened there were enough people within in ear shot who agreed that was totally possible.

The Apollo has operated for nearly 47 years as a conventional proscenium arch style theatre exactly as it was conceived by our founder John Hancock.  Occasionally we have installed the odd forestage to bring the action closed to the audience but we have always preformed with the actors facing the audience.   However theatres built in the last 60 years (for example the Olivier and Chichester) often situate the audience on 2 or even 3 sides of the performance.  Some (the Exchange in Sheffield) surround the stage with seating bringing the cast and audience into a very close relationship.

The Apollo does not allow us to achieve a complete “in the round” arrangement but we felt it quite possible to convert it to provide what is known as a traverse stage, sometimes employed when preforming drama in churches.  The audience is divided into two groups who are seated facing each other with the acting area in between.  It all seemed very simple: move the front two rows onto the stage and place the actors in the space between the front of the stage and the third row.

Given the sight lines from the balcony it was agreed that for this production we would not sell seats there and to compensate we would add a third row on stage.  All the seats on the stage would be raked, as they are in the auditorium, to maintain good visibility.  It was obviously vital that health and safety was maintained including access and egress for the audience both able bodied and those in wheelchairs.  So a three dimensional computer model was created so that all interested parties could visualise the end result and rehearsals were started based on the floor area available.

However and as if to prove that computers aren’t the total answer, some members of the Bronte cast were at the last night of The Vicar of Dibley and when at the end of the play Geraldine went down into the auditorium to retrieve the bouquet, they realised that visibility was not very good.  It was therefore decided that the acting area needed to be raised.  Now this is easy to say but involves quite a lot of construction.  A structure had to be built 18 inches (.45M) high over an area of 12ft by 22ft (3.6Mx 6.7M).  It also had to be usable as quickly as possible so that normal use of the theatre could continue.

After two works nights the Dibley set had been struck (dismantled) and the seats moved to the stage leaving the acting area available for rehearsal albeit at the wrong height.  The following week work started on creating the raised area and with a combination of careful planning and sudden bursts of inspiration a usable stage was ready for rehearsals after two nights.  It now only remains to make sure the auditorium is safely accessible and to build the seating on stage. Rehearsals on the set appear to going well and hopefully Di’s visualisation is turning into reality.