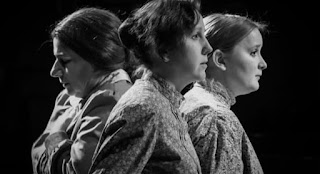 The first thing a regular Apollo visitor notices on entering the auditorium for a performance of Brontë is the stage – it’s not where it has been for over forty years! In order to enhance the intimate atmosphere of the play, director Di Evans has chosen to present it in a traverse format, necessitating a good deal of shifting around of seating and the creation of a whole new stage. A lot of work - but well worth it, because the audience do feel emotionally in touch with the lives of the characters.

Brontë is a difficult play to stage, shifting as it does between timeframes and requiring each actor to portray more than one character, some real, some fictional. Yet the production absorbed me from the start, as modern day visitors to Haworth transform into the literary family and we are plunged into the middle of their story.

Branwell, the sole male sibling, on whom rests the hopes and expectations of his father and sisters for the reputation of the family, is perfectly played by Chris Hicks, who brings out Branwell’s weaknesses, vulnerability and anger; we can sympathise with the pressure he is under yet condemn his behaviour – the scene in which he physically assaults Charlotte is particularly shocking. Teale’s commentary on Victorian views of men and women is still relevant today – Branwell has the advantages and opportunities denied to his sisters because of their gender, and he wastes them.

Peter Gale, playing a range of roles, including Patrick Brontë, with aplomb, shows true skill in convincingly portraying completely  different people and ensuring we always know who he is and how we feel about him.

The role of Charlotte, the eldest and longest surviving sister, is in the experienced hands of Fiona Gwinnett, who gives us a real insight into the turmoil of her mind: never still, never quiet, never satisfied with the domestic lot of her life. We empathise as we see her rich creativity develop as a young girl and as she matures we witness her determination to find an outlet for her writing and find a way out of the lonely life to which she is condemned.

Emily, apparently quieter and more domesticated but in reality just as frustrated with the emptiness of household chores and caring for her father, is portrayed by Abbi Leverton, who conveys perfectly the vulnerability, love of nature and innate passion that leads Emily to write as an escape from the dreariness of her life. The scene in which she is horrified by Charlotte’s ‘outing’ her as a female writer after being published under a male pseudonym is heart wrenching, as is her death.

The youngest and least known sister, Anne, is played engagingly by Susan Simpson. He anguish at being away from home as a governess and her gentle nature, often caught as peacemaker between her siblings, is powerfully acted.

The real power of the play though, highlighted by the talent and skill of the direction and acting, centres on the isolation and repression of the three sisters, which finds its outlet in the characters of their imagination; Bertha and Cathy (from Jane Eyre and Wuthering Heights respectively) are superbly portrayed by Maria Wilkinson, and represent the inner passions of their characters’ creators perfectly, in words and, so often, in silent action.

Despite its setting in the real life of famous people over 150 years ago, this play still has plenty to say about the human condition and the effect of social pressure today. It is a piece which will emotionally engage you and evoke thought and discussion long after you have left the theatre.

Brontë runs from Tuesday 12 through to Saturday 16 February, curtain up 7.30pm – if you enjoy theatre which makes you think and gives you a different experience then don’t miss it!

Tickets available from the Box Office on 01983 210010 or via the website at http://www.apollo-theatre.org.uk/bronte/