Attention to detail is really important in staging a play, and the Apollo in Newport can certainly claim to have done that with its next production - the J B Priestley classic, Dangerous Corner.


The plot requires a cigarette box that plays a tune when you open the lid. The play's director, Di Evans found a box of the right vintage, but no-one could identify the tune until cast member Ian Moth approached Angel Radio, who played it on air and invited listeners to identify it. The phone rang within ten seconds and it turned out to be a Bing Crosby recording first made in 1928.  The vintage cigarette box is not quite the star of the show, but its music does play an important part.

Dangerous Corner is built around an intricate plot with plenty of intrigue, twists and turns, and the Apollo believes it will keep audiences gripped.

All seems well at the Caplan’s independent publishing house, until a can of worms is opened at Robert and Freda Caplan’s dinner party. A chance remark plunges the guests into a re-examination of the mysterious events surrounding the recent death of Martin Caplan, and skeletons come crashing out of the closet.

The cast includes Jack Tutt, who was once a pupil of Di's at All Saints Primary in Freshwater.  He recently turned professional but is performing in this play alongside an experienced cast, as an amateur. 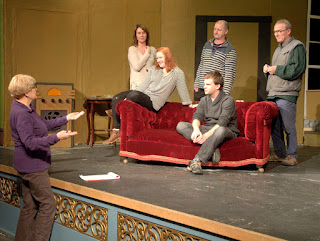